Professor Jagdish Singh was born on 5 January, 1937 at village Bhokhari of Rohatas district in Bihar State. The name of his father and mother was Nav Lakh Singh and Somarati Devi respectively, who left the world for their heavenly abode. He is the eldest among his five brothers and two sisters. He was married to Smt. Sumitra Singh in the year 1953, when he was studying in High School. There are three sons and one daughter to Professor Jagdish Singh.

After passing the Secondary School in 1953 at Kudara from S.S. Board Bihar, he went to Banaras Hindu University(B.H.U.) and obtained the certificate of intermediate in 1955, and degrees of B.A. in 1957. M.A.(Geography) in 1959, Ph.D. (Geography) in 1962. under the able guidance of Prof. R.L. Singh, and diploma in German language in 1967. Professor Jagdish Singh remained a brilliant student and created a niche in the hearts of his teacher by his discipline. learning and good manners. He put himself in hard labour and passed all the class examinations in good division with high percentage of marks. He has remained always conscientious towards his self respect and sayings since his student life. After passing B.A. in 1957 the pecuniary situation of his family was precarious as in that particular year both Rabi and Kharif crops were spoiled totally due to excessive rain. Professor Jagdish Singh told to his father to arrange rupees 100/- (one hundred) only for taking admission in PG. Classes and promised not to ask for further money in future. This promise he kept till today. For thereon he did not take a single paisa from his father and supported his studies by tuition to foreigners, teaching them Hindi language at B.H.U. With this financial base he supported not only his own study but also ofhis younger brothers who were four in numbers. Fortunately all brothers did well in their studies, one of them obtaining Mechanical Engineering degree from B.H.U. and the other from l.l.T. Kanpur. They are now very well placed, one as C.E.O. with a private concern and the other is Chief Engineer in O.N.G.C. Dehradun.

Professor Jagdish Singh as a Reader, in the Dept. of Geography at D.D.U. Gorakhpur University left for the Ruhr University, Bochum in Germany in 1975 for one year. After coming back from Germany, he again went to that University at three times within a span of 10 years. He also managed the visit of Germany for Dr. B.P. Rao and Dr. K.N. Singh, members related to the dept. of Geography of the Gorakhpur University. During his Journey to Germany at Ruhr University, Bochum Professor Jagdish Singh visited the university of Freiburg, University of Giessen, Netherland, Agriculture University, Stockholm (Sweden). Karl Householder, Budapest, Berlin, Hydelberg (Place of Alfred Hettener) Goinhezen, rtzburg as visiting lecturer and delivered lectures, which were appreciated by the faculty scholars. Professor Jagdish Singh also interacted and exchanged views with contemporary leading Geographers as Prof Hates. (Bochum), Michel Wish (London), John Smith (London), Ian Smith (London), Robert Chauses Sussees (U.K.), Fri Schultz (Germany), Alv. Stam (Sweden).

Other Educational and Institutional Responsibilities

There are more than one hundred research papers published in different reputed geographical journals of National and International level. Editor of twenty Shodh (Theses), Grnaths, published by Samvikash Sansthan, Gorakhpur. Although there has been numerous Ph. D. Scholars, registered under of supervision of other Guides, who also obtained guidance and valuable suggestions for their research, thirty one candidates were guided by Professor Jagdish Singh, who were awarded their Ph.D. degree in Geography. The name and the Title of the Research of Guided students, Title of research papers published in various Journals and name of edited Shodh Granths (Theses) may be obtained from him (J .Singh) or Covener of the Prithvi Parva Seminar at the D.D.U. Gorakhpur University i.e. Dr. K.N. Singh.

Professor Jagdish Singh first love is no doubt, Geography, but he has 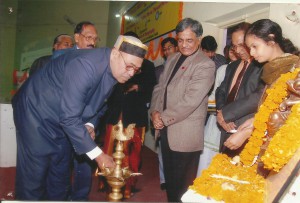 a wide spectrum of knowledge in Economics. Literatures – Hindi & English and lastly in Philosophy including German Language. Although he has a very good command in Economic Geography, Commercial Geography, Transport Geography, Applied Geography, Urban Geography, Resource Geography but the specialization is in Regional Geography. He is an authority in Regional Planning. His Philosophy regarding Regional Planning may be described as (i) Minimal disparity in development must be minimised (ii) Regional resources must be utilized fully (iii) Social interactions among regions should be strengthen to exploit their complementarily. His dissertation in MA. Final Geography was Transport Network in South Bihar and later on it became the Title of the Ph.D Thesis for his degree of Philosophy at B.H.U., Varanasi. Another landmark contribution made to the discipline has been Prof.Singh’s “Central Pleases and Spatial Organization: Gorakhpur Region” .The erstwhile Commissioner of Gorakhpur, on perusal of the book remarked,” I wish this book to adorn the office table of every distt. Magistrate.” Taking cognition of Prof. Singh’s multifaceted contributions, the geographers of the country elected him President of NAGI in 2003.

Prof. Jagdish Singh as an exemplary though gentleman and a good and strict administrator consist of multi dimensional intellectual pursuits and depth arid range of his studies. He is an institution in himself. He distinguished always himself as a great and noble teacher and researcher in the university. As a teacher of Geography, he has been superb. He is certainly a versatile genius having a command in almost all the branches of Geography. In the field of Economic Geography in fact, he has been matchless. When he entered in the classroom it seemed that some high genius in the field has entered in the class. When he started his teaching or lecture addressing any meeting in Seminars and Symposium he went into the minute details of the subject matter that sometime students and listeners were wondered about the depths of knowledge. He has a cheerful disposition all through and presented a very interesting atmosphere at the time of his lecture either in the class room or in the seminar and symposium halls. Thus, he remained a first rate teacher and commanded great respect from his students and his colleagues in the university. He was always open to all his students and used to meet them either at his residence or at department but with prior appointment. Students of Professor Jagdish Singh are spread all over the country and some abroad also. Among them some are appointed as vice-chancellors, professors, Principals, I.A.S. & P.C.S. Officers and as Directors and Managers in Private Concerns. Many of the teachers serving in P.G. & U.G. College of Northern India have been closely associated with Professor Jagdish Singh particularly in the subject of Geography.

Professor Jagdish Singh always takes things very seriously whether it is teaching, research or meetings. He always exercises his independent judgement and never believes in politics. He has a firm belief in chance and an indomitable spirit and ill power. He has a vision of enduring human values and sensitivities arid acts according to the dictates of his own conscience I recall an anecdote: Prof. UP. Singh.

Professor and Head of Dept. of Mathematics in the University of Gorakhpur. resigned from the proctorship due to misbehavior of the students with him and all the teachers of the University/were angry. Teacher Association of the university took a decision that no one shall accept the post of the proctor. The then Vice Chancellor Prof. V.D. Gupta was very disturbed. In the time of peril Prof. V.D Gupta called Professor Jagdish Singh and proposed the Proctorship to him. Prof. Jagdish Singh refused the proposal given by the V.C. remembering the good relationship with Prof. V.P. Singh & the decision of the Teacher Association. When the Vice Chancellor, Prof. V.D. Gupta told to Prof Jagdish Singh, that now he (V.C.) has to go back to Lucknow University quitting the Vice Chancellorship of this university. Then Professor Jagdish Singh gave his second thought and according to his nature decided to accept the proposal given by the Vice Chancellor. He later on nutralized the anger of the staff members of the university and successfully worked on the post of proctor of the university.

Prof. Jagdish Singh does not believe in religious rituals in worship of deities. He believes in Luck. He is of the opinion that hard labour and Luck both work together to achieve anything in the life of a man. Labour without Luck does not bear any fruit and vice versa Luck without labour bears nothing. He now believes in popular saying that “Samaya Se Pahale, Kishmat Se Jyada, Kisko Mila Hai, Kisko Milega.”

I came to know by my reliable sources that Professor Jagdish Singh has completed a Novel in Hindi, which is to come in the hands of readers after printing very shortly. Now days Prof Jagdish Singh has become more liberal and catholic in human relations which transcended the bounds of caste, creed and colour. He has truly acquired wisdom and understanding of his long life which made him a thorough gentleman and real ‘Karma yogi’. His contribution to the cause of geography are indeed varied and many. I consider him the doyen of Geography, who is playing a vital role in promoting teaching and research in Geography in the country.

The Ideology of Samvikas is brainchild of Prof. Jagdish Singh and ‘Prithvi Parva’ is being celebrated because of his motivation.